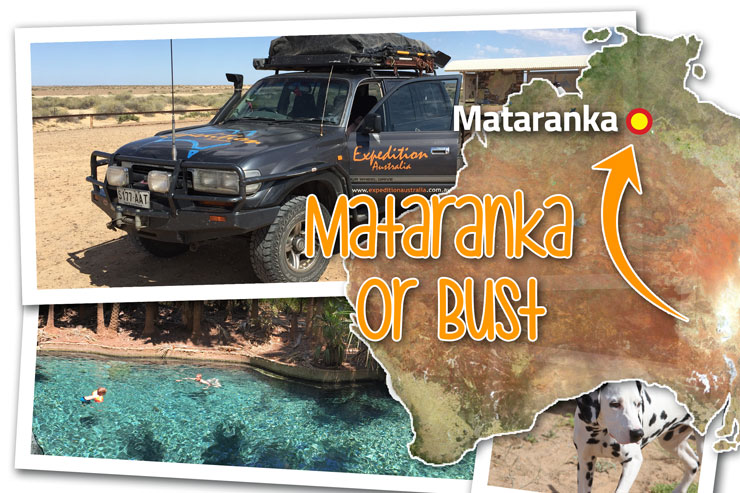 Most people would think you’d be crazy to spend 3 weeks driving 7556 km to the top of Australia and back to swim in a hot springs . . .

And they’d be right!

But when you’re a family of road trip lovers like us, the destination is just an excuse to hit the road in search of some adventure.

Our original plan for this road trip was to head up to Lake Argyle in the East Kimberley.

But plans have a habit of changing . . . especially at the last minute!

I’ve been working with Charlie Sharpe (who owns the Lake Argyle Village) on getting back up there and shooting some new material for the 2016 edition of our Discovering Lake Argyle documentary.

Since we shot the original film things have really kicked on around Kununurra & Lake Argyle and there is plenty of new development, especially around the Ord River Scheme.

There is even talk of raising the height of the Ord Dam to increase the capacity of the Lake.

So with the outline of a shooting plan in hand, I packed the kids (Savanna, Sara & Sienna), my Dad (Peter)  and Buddy the Dalmatian into our Landcruiser, hooked up the camper trailer and we hit the road.

It would take us about 8 days to get to Lake Argyle via the Oodnadatta Track and Stuart Highway, I’d have 4 days to get all the shooting done, then we’d spend about 8 days getting back coming down the Tanami Road and exploring around the Red Centre.

At least that was the original plan . . . and plans have habit of changing.

Three days into the trip I managed to get some phone range and found an email from Charlie letting me know that things at Lake Argyle had taken a turn for the worse.

They had bushfires all around them, the air was filled with smoke and everything was winding down for the season rapidly - sooner than they normally do.

This meant that I wouldn’t be able to shoot a lot of the material I was planning to!

So rather than only get half the job done, I decided to postpone the Lake Argyle visit (an excuse for another trip 🙂 and we grabbed the road atlas and started working on plan B.

We were in Coober Pedy at this stage and had about 17 days before we needed to be back home.

This was our first road trip with our new dog, Buddy, so we now had to factor him into our plans.

This is when the restriction of travelling with a dog really hit home.

We talked about the idea of spending a couple of weeks around the Red Centre and taking my dad out to see Uluru (which he hasn’t seen yet) - but virtually everywhere we wanted to go is in a National Park and ‘NO DOGS ALLOWED!!'

You can take dogs to the Yulara campground but not out to Uluru or Kata Tjuta - and we couldn’t leave Buddy in the campground by himself.

We looked at heading up to Dalhousie Springs & Mt Dare then taking the Old Ghan Railway track into Alice Springs but this would involve entering Witjira National Park, and of course, no dogs allowed out there either.

Nor are they allowed at any of the gorges along the Western Macdonnell Ranges (except Glen Helen Resort) or Kings Canyon.

So, with the 4WD atlas open we looked further north along the Stuart Highway until our eyes landed on Mataranka and then the decision was made.

It’s a long way to go for a swim in a hot spring but having been there many times before, we knew it was worth it.

Plus, all of the road houses on the way up and the Mataranka Homestead are dog friendly so we’d have no issues with places to stay.

We reworked the itinerary and locked in 4 nights at Mataranka which would give us plenty of time for swimming, relaxing, checking out the local area and enjoying some cold drinks at Maluka’s Bar at the Mataranka Homestead.

It did occur to me at this point that we were probably a bit crazy driving several thousand kilometres from home to basically go for a swim but, after all, it’s all about the journey!