To repair, restore and upgrade our 25 year old 80 Series Landcruiser into the ultimate low budget family touring 4WD with a total budget of around $20,000 . . . including the value of the car.

I was hoping to be telling you that Terry (Mr Mods) and I had installed all of the new suspension bushes and shockers by now but unfortunately that isn’t the case.

I’ve sent the wrong ones back and I’m still waiting for the correct ones to arrive - maybe this week, fingers crossed.

BUT . . . my new steering dampener did arrive and I managed to get that installed . . . which is a good start. 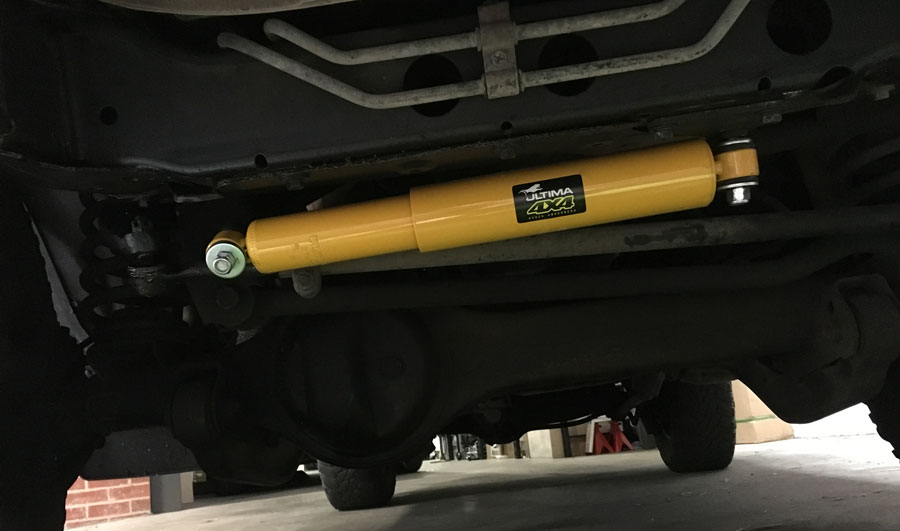 I thought it would be a quick and easy job but it turned out that the guys at ARB who installed the old one back in 1998 had used Loctite in the pins and nuts and they were stuck fast. It took some serious pounding with a hammer and general levering to finally get the old pins out. But it's all good now.

It hasn’t fixed the wobble in the front end over 60 km/h which still comes and goes but I think there is a slight improvement so that’s progress and $73.80 well spent.

The big step forward this week though was that I managed to get the rear drawers installed. 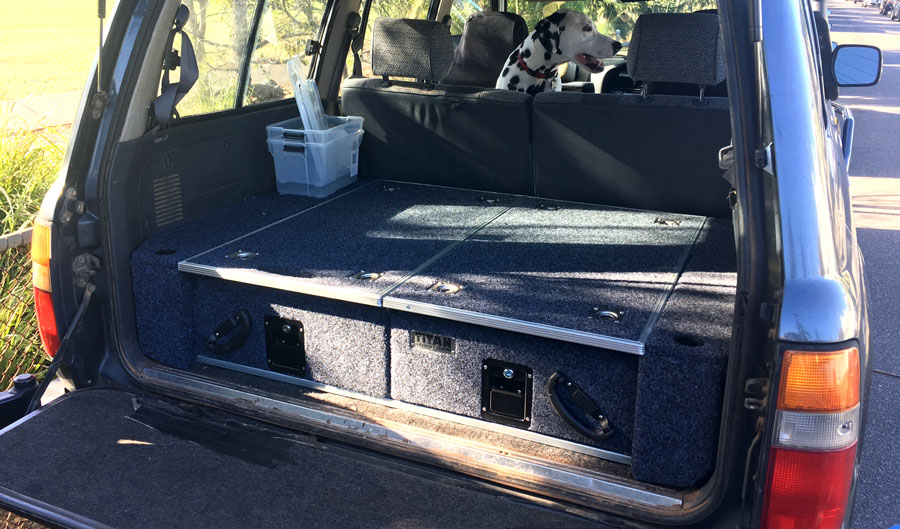 It was around a 4 hour job and relatively straight forward although they didn’t fit in easily without a bit of modification.

There are two adjustable mounting bars on the bottom of the frame that run from left to right that need to be bolted to existing mounting points on the car floor.

These mounting bars can be moved from front to back of the drawers to align with whatever mounting holes your particular vehicle has already.

The adjustment holes are approximately 1 cm apart and I found that one bar would line up perfectly and the other would be about 2mm off centre. Just enough to make it impossible to get the bolts through the rails straight.

A bit of filing with a round file to make the holes in one of the mounting bars larger and I managed to get them in nice and tight.

The photo below should illustrate the problem . . .

Despite the alignment issue I have to say that for a cheap set of 'one size fits many' drawers ($465 including delivery) I’m surprised by how good the quality is.

The drawers run smooth and close tight and there are no rattles at all while driving.

I’m sure that if I paid 3 x the price the quality would be better, but given the budget nature of this project I think these are a winner.

The true test of course will be when we get them on some corrugated road.

Another win is that my compressor fits completely inside the right side wheel arch storage area. 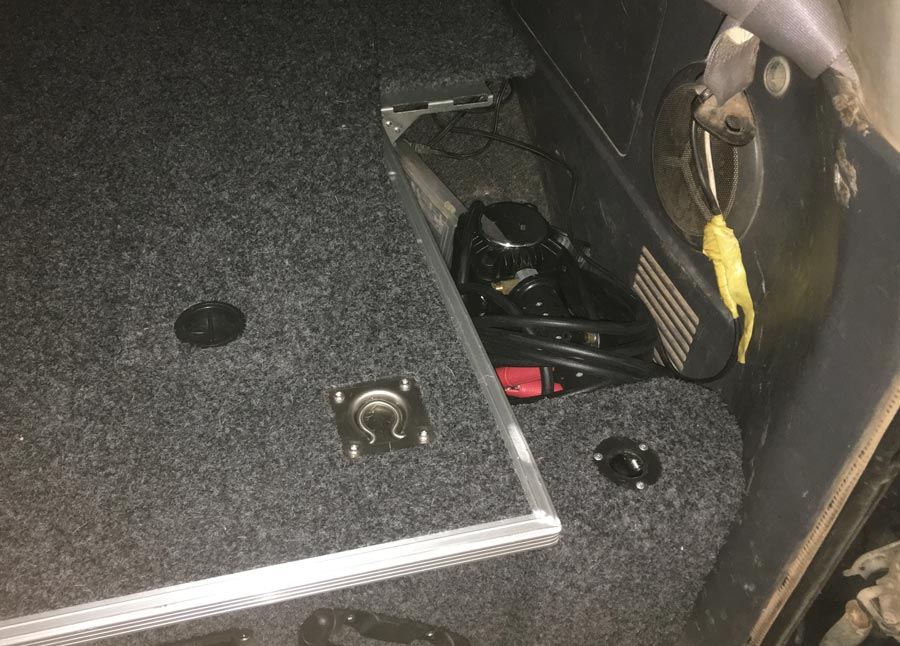 I was thinking that it would go in one of the drawers but this is a much better solution.

It’s just sitting in there for now but I’m working on a plan to mount it to the floor and run air lines to a connector at the front of the car under the bonnet and to the back facia of the drawer wing behind the tailgate.

I’ll hard wire it into the second battery and be able to plug the air hose into the connectors at the front and back of the car and easily pump up the tyres on the side of the track without needing to drag out the compressor.

As soon as the correct suspension parts arrive I’ll book some time with Terry at Mr Mods and we’ll get them and the shockers fitted.

This will then clear the way to get the wheels and tyres fitted and the wheel alignment done.

While we’re there we’ll see if we can diagnose the source of the steering box leak and whether it’s fixable or a changeover box is needed (about $400).

I’ve bought some black satin enamel paint cans to start painting things like windscreen wipers, side mirrors, spot lights etc. which are easy small jobs I can do when I get an hour or two.

On the weekend I’ll dig out my cargo barrier and see how I’m going to need to modify it to fit with the drawers in place. I’m hoping it will actually still reach the floor in the gap between the drawers and the seats but if not I’ll do some cutting, welding and painting to make it work.

I haven't solved the water storage problem yet.

The problem is that running a tank along the back of the cargo barrier will make it impossible to fit our Waeco CF80 on the fridge slide as there won't be enough room between the tailgate and the water tank.

I'll probably need to build in some reinforcement under it to carry the load of a full tank. 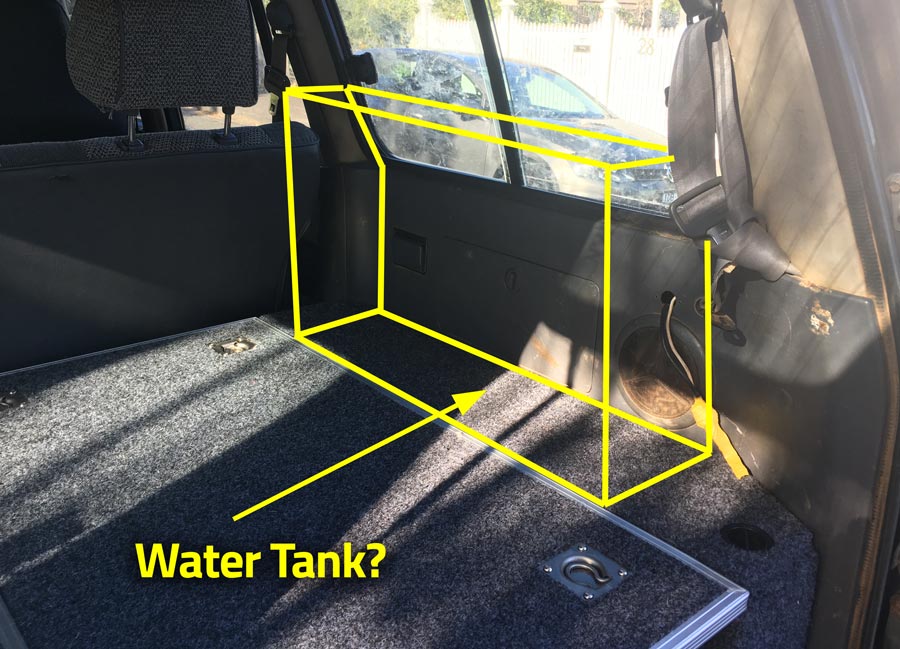 Having a water tank on the right side of the car will also help to offset the weight of the spare wheel hanging on the left side of the rear bar.

So I’m on the lookout for a poly tank that will fit in that space and hold around 50 ltrs.

With the 20 ltr jerry on the back bar this would give us 70 ltrs in tanks.

I'll also carry a few 10ltr water boxes ($3.50 from Coles) for topping up drinking water bottles and we should have enough water on board.

I found some cheap and light plastic storage boxes at Bunnings which fit neatly in the drawers so I'm starting to work on a plan for getting everything in the drawers I need to. 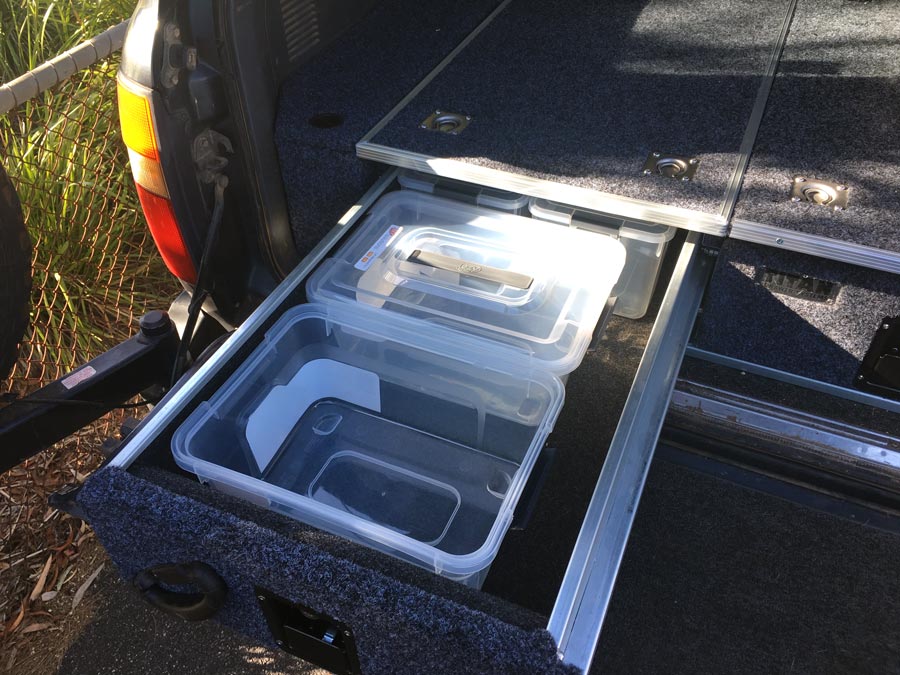 This will mainly be food, cooking gear, tools, recovery gear and spares.

I currently keep most of my tools in a larger toolbox that won't fit in the drawers.

In the spirit of 'reducing weight' I'm going to go through the tool kit and pull out just the tools I need to take on road trips and leave the rest . . and the toolbox behind.

This should cut down the space needed by about 50% and the weight by about 10kg at least.

I'll use one of the larger plastic boxes in the photo above as a toolbox - it's not fancy but it's cheap and light and they still have a lid and handle so I can pull it out and take them to where I need to work on the car.

If I find that the plastic boxe falls apart after some extended corrugated road driving then I'll get something stronger - but for $8.00 for the plastic box it's worth a try.

Here's the latest version of the budget spreadsheet.

Not much has changed since last week except for the addition of the storage boxes and black paint.

Subscribe to our newsletter for updates in your inbox